Fun, fast, and explosive, this is the ultimate kite/cable crossover board. 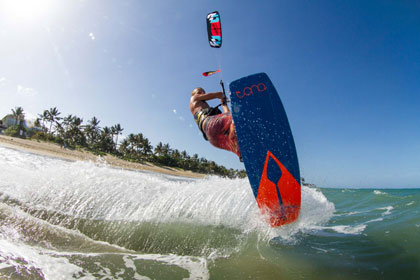 The Pop is Tonas debut kiteboard. Tona put this baby through some rigorous testing and after a full year + of R&D we came up with something special. A board that explodes off the water whether it's on natural kickers or flat water, without sacrificing any upwind ability. The Pop is stiffer than the average kiteboard, this helps hold its static rocker line while riding and also helps generate the maximum amount of energy when loading up to pop off the water. The double concave in the center and deep channels along the rails give it lots of stability while riding finless.

The Pop comes with 0.8" Ramp fins. These fins are shallow in depth which makes them great for riding up onto the beach or even hitting ramps without breaking off. The extra length provides increased surface area so you get as much grip as you would normally get with deeper, conventional fins.

The Kung Fu Grip
With the deepest and most effective channels you'll find on a kite board, the bottom design of the Pop offers grip like no other when riding finless. The double concave works in collaboration with the channels acting as a dampener to soften hard landings while the flat surface area out the tips makes for minimal drag and a clean release off the water on air tricks. 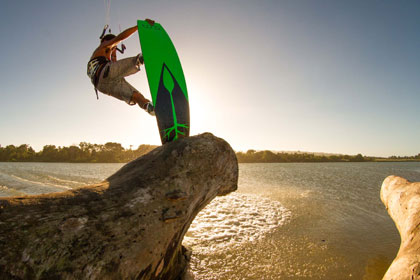 Tona uses a sintered UHMW slider base for the bottom of our boards. This sintered base is widely known as the toughest slider material in the snowboard and wakeboard industry due to its compression formed polymer structure. It also holds up great for sliding up onto sandy beaches. Rub some wax on the base for a little extra slip and steeze.

Jake Kelsick loves the Pop 138 for it's explosive release on kickers, its speed and upwind capability.

5 other products in the same category: